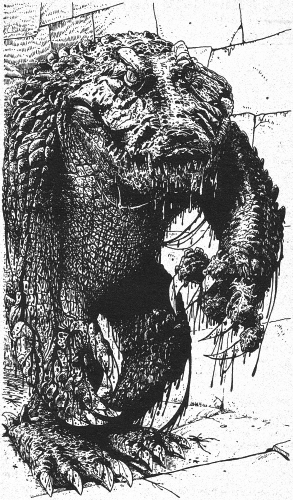 Basic Information
Blood Fiends are terrifying beasts that can instill fear into the bravest of hearts. They prefer to establish a lair, leaving a sickening scene of blood, guts - and the stench of death - in the surrounding area (GD4 s162).

Appearance
Covered in tough, scaly crocodile skin, Blood Fiends appear as powerfully hunched humanoids topped by the head of a ferocious crocodile (GD4 s252). Their reptilian arms are long, with hands that reveal lethally-sharp claws. These vile animals are so consumed by blood-lust that they remain constantly enveloped in the nauseating entrails and bodily fluids of their luckless victims (GD4 s252).

Known or Supposed Origins
It has been suggested by some inhabitants of Mungoda that Blood Fiends begin their existence as Dracomen, but become debased either through age or some sort of parasitic infection of the brain.

Geographical Distribution
The natural habitat of these vile creatures are jungles and swamps.


Note: There are no official statistics for Blood Fiends. The above statistics are fan-generated.

In comparison to their reptilian 'relatives', Blood Fiends are highly agile and may actually be warm-blooded (?).