Appearance (and variations in different places) 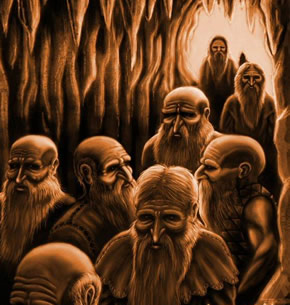 Dwarfs would appear to the uneducated eye to simply be aberrations in the human* species, and might therefore go undetected or ignored as such in isolation or small groups. The men (whom are far more likely to be seen travelling or adventuring in the Lands of Legend*) frequently wear their beards long. Dwarfs have a lifespan considerably longer than that of men, some 200 years, and hence are often seen with grey hair and beards, and considerable wrinkles – one reason that a high Looks* score rules one out of being a dwarf*. See "Distribution" below for a discussion on whether or where dwarfs might exist, and a GM's chosen view on that will determine whether there are significant, or no, variations to the general appearance of Dwarfs described in Book 1*.

The lowland Knockers^ of Cornumbria* and especially prevalent in Darbon Barony^ are in aspect quite similar to their mountain based cousins.

The Dwarfs of Thuland* and Mercania* are pale of complexion with great black beards and manes of black hair. They are masters of the arts of dvergmál ( the crafting of dweomers into weapons and armour).

The Yamboe of Western Mungoda* reside, as do most dwarves, within mountain kingdoms. Though in the case of the Yamboe their kingdoms are located mainly on coastal islands. They are masters of iron work and will often hold elaborate feasts at ancient stone temples on the islands shores on nights of the full moon. Any human who wishes may join them for these feasts and if he minds his manners he may be gifted with iron weapons of truly fine workmanship. The Yamboe are as pale skinned as their northern cousins but their hair is platinum blond rapidly ageing to silver.

The Daktyloi of Emphidor* are prodigious smiths and metalworkers, they live in small subterranean settlements on some islands and within the greatest mountains of the ancient land. The Daktyl often lead small extremely secretive cults of human smiths and instruct them in their secrets. The Daktyl are extremely muscular and hairy, and often sport large burn scars from their forge work.

The Nykštukas of the deeps of the Rymchaeld Mountains* are a strange and fey people even for Dwarves, their caverns are dark and dank away from the forge fires and they would seem to be a primitive and backward people were it not for the exquisite workmanship of their weapons and armour which are said to be among the greatest of all those made by dwarven hand.

In Legend, Dwarfs have a number of stand-out, or it could be said these are "stereotypical" traits:

A Dwarf can be a Knight* or Barbarian* from the canonical professions, or conceivably an Assassin* (though some GMs would take some convincing of how this might have come to be). Their inability to use magic precludes them from all the magic-using classes.


As can be seen above, the lack of ability to use magic limits Dwarfs considerably in profession choice.

Dwarf as a Profession

In years gone by an anonymous contributor on the WWW contributed a specific adventuring class of a Dwarf - that is, one that is purely a Dwarf having no specific profession. That 'profession' is extracted in a separate article here.

The distribution of Dwarfs throughout Legend is perplexing, as they are listed as a potential adventuring race in Book 1 but through all the game books, specifically Book 6, their only pinpoint on the 'map' (so to speak) is in the Harogarn Mountains* in the Southern Lands. Ordinarily this would lead to perhaps two conclusions, which may not be mutually exclusive:
However, page 138 of Book 1 is insightful. There, in the Hills section for Random Encounters (and note there is no reference to Mountains, so Hills counts for Mountains too), an adventuring group might stumble - in any Hilly / Mountainous place - across a Dwarf City or Settlement. This therefore suggests are more widespread distribution of Dwarfs throughout Legend* (or, at least, in Ellesland* where Books 1-5 are originally set), with Dwarfs' significance in human history minimal and perhaps the whereabouts of such places mystically hidden. Note also that there is a 29% chance of running into a Dwarf settlement or city in a Hills random encounter, compared to a 19% chance of finding just an Elven* community of 3-30 individuals.

All Dwarfs speak the dwarfish tongue, and know the runes used to transmit messages - usually carved into rock or metal, not recorded on paper/parchment. However, depending on which theory you accept under the heading "Distribution" above, it may be that Dwarfs of distant geographical origin might have trouble understanding each other.

Dwarfs revel in retelling the tales of their forefathers, their achievements in battle and tunneling. Their religion is little known, but it is suggested the closest analogy in the human world would be to describe their religion as ancestor worship. It is considered highly unlikely that any dwarf would convert or adhere to the True Faith*, the Ta'ashim * or indeed any other religion of men.

Dwarf Wedlock
Simon Bray and friends suggests that dwarven marriage, especially between warriors is a short and simple affair, little more than an elongated speech which translates to "Shall we get married then.", which if both consent is binding. However their divorce proceedings are prolonged, painful and even fatal on occasions. When you are short, busy digging for gold and could be eaten by all manner of underground monsters there is little time for sentiment. However, when it comes to dividing the wedding gifts (loot) well that is another matter all together!

Contrasts with Race-type in other Game Systems

Dwarfs are perhaps far less frequently encountered, prevalent or significant in the lore of the world in Dragon Warriors* than in, say, Tolkien's Lord of the Rings works or games like AD&D or World of Warcraft. The prevalence and importance of Dwarfs is perhaps left vague by Dave Morris in Book 6 to enable GMs the breadth to decide whether to involve them much, or not at all, in the particular take on Legend* they wish to adopt.

In the Lord of the Rings, the Silmarillion legendarium explains that the earth-god Aule created the Dwarfs out of a desire to have beings akin to the Elves* in his own domain. The Dwarfs emerged from the mysterious lands of the East from the mountains and their domain lay therein. In a way, therefore, the eastern Harogarn Mountains* in Legend* represent, similarly, an eastern origin and bias for the Dwarfs of Legend*. It may be, therefore, that the Dwarfs of Legend* have some greater familiarity with the peoples, lands, geology and geography of the east than the west of Legend*.