Elves are mysterious beings of origins unknown, choosing to stay out of the affairs of men though their involvement in Legend's* past is mysterious and no doubt significant, being of great longevity and therefore seeing many Human* ages pass by them from their secretive homelands. 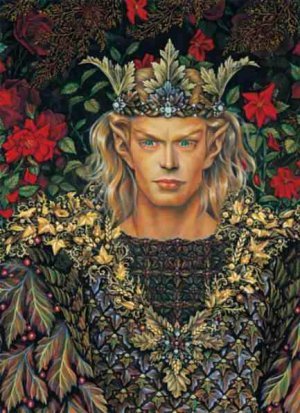 The most distinctive feature of Elves are their pointed ears. They are, otherwise, generally lithe in appearance, as tall as men and fine-featured and attractive. Those that inhabit forests (the majority) often dress in the green or brown hues of their woodland environs.

Apart from the Orang bunian and the Night Elves there are other far flung Elven communities scattered amongst the strange Lands of Legend*.

The Aziza of the rainforests of Mungoda* are seen as a kindly and beneficient race who will aid those Humans* who obey their laws and respect their sacred jungles. They are a fey people, shorter than the Human* tribesmen but with mahogany and ebony coloured skin and green cat-like eyes.

The Vila of Analika and surrounding countries are powerful sorcerors and warriors they live in the high meadows and forbidding conifer forests and take tribute from the local villagers. They are a matriachal people and their lack of facial hair and penchant for flowing robes means that the local Humans* believe them to be all female, some Human* men take this to mean that Vila will be welcoming of his advances... the lightning blasted, scattered body parts that litter the forest after such quests would beg to differ.

Elves require a minimum Reflexes and Looks score of 12, with Strength no greater than 13.

Professions that would be suitable for players to play as elves are as per the following matrix:


Elves do not have the temperament to be Barbarians*. They lack the belief in the True Faith* to qualify as either a Paladin or Priest, though it is conceivable that they might serve as their own form of Knight* or Shaman.

Elves as a Profession
An anonymous author once proposed on the WWW that Elves could be a separate profession, and that suggested profession is extracted here.

Elves are thought to be plentiful in the forests of Algandy*, but little else is known of their whereabouts elsewhere. It is supposed that deep in the forests throughout Legend*, Elves may exist. Indeed, according to pages 136-138 of Book 1, in a Forest there is a 19% chance of finding an Elven community of 3-30 individuals. Compared to a 29% chance of running into a Dwarf* settlement or city in a Hills (or Mountains, by inference) random encounter, Elven communities are well hidden -but still, nonetheless, capable of discovery in any given forest on Ellesland*, if not all of Legend*.

It is safe to say that Elves have no interest in the religion of men but little is known of their own belief system. One could infer from other game systems what their belief system is (see below) and their beliefs are open to debate.

Elves have special abilities in:

The Elves of the Dragon Warriors* world are eerie, removed creatures capable of great cruelty and terrible pride. The intrinsically magical nature of the Elves often reveals itself in otherworldly qualities, as subtle as they are marvellous. The referee may choose to give an important Elf a peculiarity or two from the list below, or roll d100.

Contrast with Elves in other Game Systems