Now more commonly referred to as Frost Giants*, these massive human-like beings are a dying breed.

Heavily bearded and even more heavily muscled Jotun resemble the ancestral peoples of the Mercanian* coasts, indeed it is said by some that quite a few ancient bloodlines run with Jotnblud^. Armed and armoured with massive axes and war spears and wearing thick plates of whale or bear-hide leather under thickly furred cloaks Jotun are feared and honourable warriors. Female Jotun are striking in appearance and as capable warriors as their menfolk. 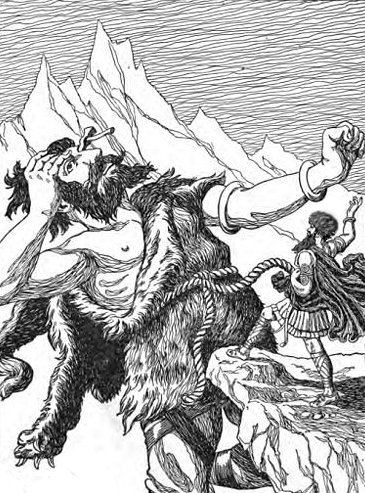 The father of Jotun kind and their ancient progenitor was Skrymir^, Jarl of the Jotun^, Brother to Glaciers^ and Lord of Jotunheim^. A mighty kingdom which ruled the waves of the eastern oceans, the powerful and warlike Jotuns warred against Krarth* and the True Magi* who ruled there.

With his massive iron-spiked gauntlet Doomgrip^ and his mighty iron banded armour, Skrymir^ swept the Magi's* armies aside with his might. But something went wrong, tales differ but at some point Skrymir was enslaved by Magus Zyn^ and used as a weapon against his fellow Magi*. The other Magi* discovered this and banded together; Magus Zyn^ was overthrown and commited to undeath in the pits of Krarth* and Skrymir^ was killed and dismembered.

In the ancient days before the Blasting of Spyte*, Skrymir^ was the ruler of the mountain Fortress Útgarðr in Jötunheim^. He was lord of the Jötun and his title was "Lord of the Outlands"^. Skrymir^ would often contend with and indeed hosted the ancient gods and their servants within his halls and he would set them riddles and contests for his and their amusment.

When Skrymir^ fell the Jotun were thrown into disarray, in all their long lives they had only known one leader and it was he who kept the ancient knowledge of stone craft, excavation and engineering. Before long the war-like and honourable nature of the beings had split them into small warbands and the ancient fortress was abandoned to the ice. The seas rose and the cavern-harbours of the Jotun were drowned, their seamanship skills lost they retreated into the wastes and mountains where their villages and outposts are to be found to this day.

Jotun^ are found in wild regions throughout Mercania* and Thuland*, they avoid Krarth* out of fear of the Magi*; pretenders though the current Magi* are.

Though swallowed up by the northern seas the great stone fortress of Jotunheim^ still exists, it's weathered walls now indistinguishable from the mighty mountains it was built upon, some of the peaks of it's tallest battlements and towers comprise the outer islands of the Lyften Wall^. Beneath the feet of the inhabitants of these islands are ancient chambers and passage ways unseen by human eyes.

If Skrymir^ can somehow be restored from where his remains lie within the Battlepits of Krarth* he will destroy the current Magi* and return to lead his people back to their rightful place; If he remains dead, then his people will continue to dwindle away.

What relation the Jotun may have with the Giant Men* of Ellesland* and Southern Lands* is unknown, if questioned on this most Jotun will dismiss them as Jotnblud Humans* who have managed to live beyond their mortal years and have to some extent 'grown into' their Jotun-nature... others will look askance at the questioner and refuse to speak on the matter.