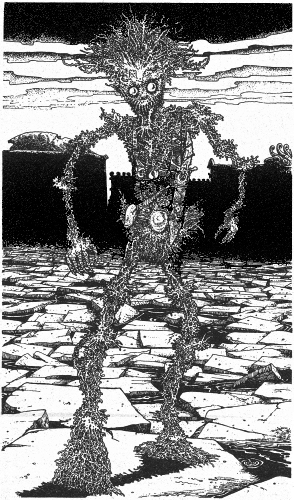 Kappa are described in considerable detail in Book 4.

Basic Information
Kappa are malevolent creatures that inhabit aqautic citadels. They possess a xenophobic disdain for all animals, with an especially bitter hatred of Humans* (Book 4 p105 and GD4 s29). Kappa are also known to unleash monstrous Sentinel Crabs^ on their foes (GD4 s60).

Known or Supposed Origins
Once similar in appearance to Humans*, the Kappa inhabited a levitating island (Book 4 p104). For their sins, the cruel Kappa were consigned beneath the seas and mutated into horrific living-rock (Book 4 p105).

Geographical Distribution
Large Kappa raiding parties may be encountered in nocturnal sea-based scenarios. The Kappa have been a constant threat to the ancient city of Thalios^ (GD4 s205).

Average Statistics
Varies - refer to Book 4 for a detailed description.

1. An account of a Kappa attack on a ship as it passes through the mouth of the Sea of Lament:

(by Bulya)
As the crew rushed about securing lines and readying to stop the ship from sinking if she had been holed the other two companions joined Zaki at the railing. Beneath them the water was clear and green in the lull created by the ship. There seemed to be a lot of clear water between them and the sand and rock covered bottom.

Alexandros suddenly started and the others turned to where he had pointed, for the briefest of moments what seemed to be the outline of a man had passed beneath them! Following the direction 'he' had gone, the three men saw a number of large striped fish attached by some means to the hull. As they were puzzling over this they saw what seemed to be a large number of some type of exceptionally large crab swimming up from the bottom and clambering over the hull towards the surface.

The captain was on deck now and demanding to know who the imbecile was that had run his ship aground, one of the sailors turned from his place at the other railing to answer him but only managed a harsh scream as he was transfixed by a barbed spear of unusual manufacture and crashed to the deck dead.....

Culatori wasn't sure what the creatures were, or how they'd stopped a ship under sail in open water, but he knew an ambush when he was in one, and knew a trick or two of his own.
"TO ARMS!" He bellowed at the top of his voice. "Keep low and 'ware for thrown spears! OTTAR! Get your men in armour and form up inside the wheelhouse! Everyone else rally on me!"
It was imperative the sailors stood together and fought as one rather than be singled out and cut down. If they could just lure the unknown enemy onto the deck, the sudden appearance of Ottar's trained men in armour would be an unwelcome surprise to someone expecting ragged sailors.

Zaki drew his sword with a flourish, "May the Lord of Mercy forgive me Captain, but I will fight this foe with steel as long as I may. The magic I carry must only be used for the most dire threats, or else it will be all spent by the time we reach our true adversary. This means, sadly, that some of your men may die, when I could have saved them. All honor be upon them."

"Lord Saviour, keep us from harm, deliver swift retribution upon our enemies..."

Alexandros prayed in a low, monotone voice, and wondered about the nature of the enemy even as he followed Culatori's instructions.

What manner of men, or beasts, are these?

The men at arms donned their stowed gear and clattered up out of the hold, weapons at the ready. They arrayed themselves about the wheel housing keeping their flanks and rear guarded by solid timbers. The sailors moved towards their captain, those near Culatori saw what was coming up the side of the ship and loosed a bundle of long metal spears with a barbed hook set back from the point passing them to their fellows as they moved, ' Crab spears, they're good eating if we survive this.' winked one old cut-throat.


Captain Cho looked over at Zaki and nodded, ' Men! Ware for boarders! Tarun and Sayal, below decks now! Stop up any holes these things try to put in us!'
As if in answer to Al's unspoken question the huge seagreen crabs began to lever their armoured bodies over the side of the ship, the sailors responded quickly the long spears poking between fierce claws to pierce the softer mouthparts and into the creatures innards. Crustaceans died and burbled their last on the deck as the men worked efficiently, but the occasional hesitation by the men was repayed with blood as heavy claws severed spears and limbs with equal ease.
Al was about to run to their aid when a strange and unworldly figure leaped over the railing and hissed at him, like some dreadful seaborn child of man and spider it crouched on the deck, mauve pink skin glistening with brine.

The thing called out; a strange and disquieting noise like a distorted reed-flute filled with strange clicks and popping undertones issued forth from a mouth more mandibled than lipped. Too-long limbs jutted out from an armoured body, the face like a funeral mask, burning pearl eyes staring at the young Emphidian* and
it raced towards him wide bladed short sword held before it.

Beyond the companions more of the beasts began to fight their way past the sailors to appear on the deck.