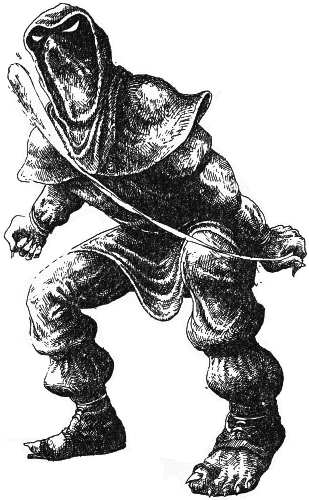 Basic Information
These foul beings are demonic Assassins* that are spawned into existence through diabolical black magic (GD2 s166). Nightmare Guard are silent killers that inhabit the dark shadows, waiting for the opportunity to strike their target with swift and deadly force (GD2 s75). Although they never speak, they are a supremely cunning foe that will invariably kill their target or be destroyed in the attempt (GD2 s190).

Appearance
The Nightmare Guard are similar to Humans* in stature and are enrobed in form-fitting dark silks and softened leather sandals as black as night. However, their beastly dark-grey hands and toes remain bare, revealing viciously razor-edged long nails. Meanwhile, their inhuman faces are permanently veiled; their evil yellow eyes glow menacingly through the darkened fabric (GD2 s190).


Note: There are no official statistics for Nightmare Guard. The above statistics are fan-generated.

Upon death, the body of a Nightmare Guard will be instantly consumed by yellow smoke and return into the material from whence it came - a pile of hot ashes - leaving behind it's clothing and weapons (GD2 s166).

Nightmare Guard are the preferred henchmen of the insanely evil Sorcerer* Damontir the Mad* (GD2 s190).